Diseases & Conditions
Sleep Disorders
Sleep Apnea
✓ Evidence Based
Even though every patient has different symptoms, signs, and causes when it comes to sleep apnea, we can most certainly make a list of the most common sleep apnea causes in patients. 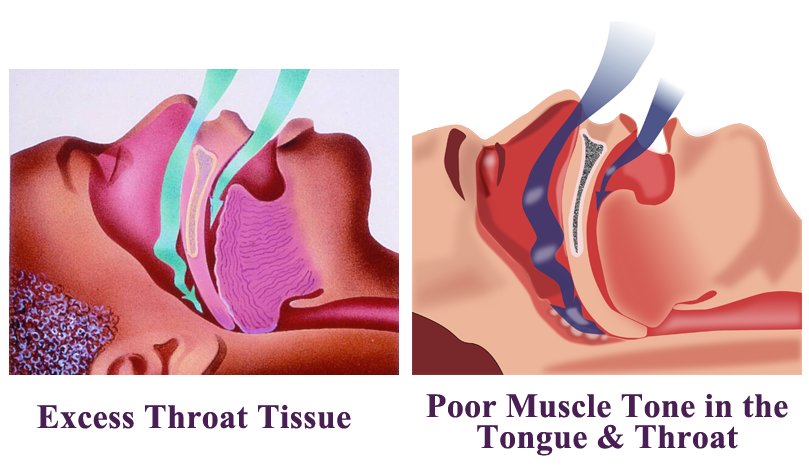 Sleep apnea is a serious and common disorder that occurs when a person stops breathing repeatedly during sleep. Even though these pauses last for 10 to 20 seconds, this disorder results in decreased oxygen levels in the body and the brain, which can be very serious if not treated. Generally speaking, there are many possible causes of sleep apnea known in the world of medicine.

In adults, the most common reason why they develop sleep apnea is obesity or excess weight. The reason why this is a cause is that obesity is always associated with excess soft tissue in the throat and mouth, as well as the rest of the body. When people are obese or overweight, their muscles in the tongue and throat are relaxing, while the soft tissue blocks their airway and prevents them from breathing. However, there are still many other things that can cause sleep apnea in adults.

In the case of children with sleep apnea, the main cause is usually enlarged adenoids and tonsils. Additionally, large overbite or other dental conditions are known to lead to sleep apnea in children.

Some of the less common causes in children include birth defects or a tumor or some kind of growth in the airway. Birth defects that can cause this condition are Pierre-Robin syndrome and Down Syndrome. The first causes a small lower jaw in children which as a result, causes the tongue to fall back in the back of the throat and ball up. The latter is known to cause tongue, tonsils and adenoids enlargement, which leads to an inability to breathe and a decreased muscle tone in the airway of the child.

The fact that we did not mention obesity as a cause of sleep apnea in children does not mean that childhood obesity does not cause this condition. It is actually a cause but is much less commonly associated with the development of this condition in children when compared to adult obesity.

Regardless of the age of a person, sleep apnea is known to lead to serious complications that include accidents, cardiovascular disease, and even death. This is why it is extremely important that people pay attention if they experience symptoms of this condition such as loud snoring followed by strange sounds like gasping for air and repeated awakenings at night.

In addition to obesity and the causes we mentioned above, there are also many other features in terms of anatomy that are known to be causes of sleep apnea. While the majority of these characteristics are actually hereditary, they are closely associated with the condition. Such features include a thick neck, round head, and a narrow throat. Additionally, people who have hypothyroidism, allergies, deviated septum or excessive production of growth hormones may develop this condition as a result.

Certain lifestyle choices can also be the cause of sleep apnea. Such causes include smoking, alcohol use and the use of sedatives that relax the muscles.

With obesity being the main cause of this condition, we would have to discuss this particular cause a bit closer. More than half of all patients who are diagnosed with sleep apnea are overweight or obese, which means that they have a body mass index that exceeds 25. In adults, this is the most common cause of sleep apnea.

Even though everyone can develop sleep apnea, the chances of obese or overweight people having this condition are higher. The difference here is only between those below and above the age of 60 since people after this age are less at risk of developing this condition.

Why do people become obese? Extreme obesity is commonly associated with the Pickwickian syndrome that is known to occur simultaneously with obstructive sleep apnea, the most common type of this condition. When this happens, the excess body fat of the obese person starts interfering with the lungs and the chest movements. The lungs are at risk since the obesity causes inefficient, even shallow breathing both during the day and night. Interestingly, 25% of the extremely obese people actually suffer from this particular syndrome while at the same time suffering from obstructive sleep apnea.

Obstructive sleep apnea is estimated to reach 9% in middle-aged adults. However, in the majority of cases, this condition is not noticed and therefore, not treated.

People who are over the age of 65 are at higher risk, with an estimated 10% of people developing sleep apnea. As aging is known to affect the brain functioning and ability to work at full power, it is becoming less able to keep the muscles in the upper airway stiff while the person is sleeping. This is why the elderly are at higher risk of experiencing difficulty breathing during sleep.

Men are more at risk of developing sleep apnea than women. This is estimated to be up to four times more prevalent in men, except in cases when the women are pregnant or in and after menopause. When women are pregnant or after menopause, they are more likely to develop this condition than men. This is why when seen in the elderly, this condition is more prevalent in women than in men.

Women who have gone through menopause and start receiving hormone replacement therapy are less at risk of developing sleep apnea than those who do not. This somehow suggests that the estrogen and the progesterone that is given as such therapy is probably protective in terms of sleep apnea. Still, this is known to affect health in other ways, which makes it a bad therapy for sleep apnea.

Aside from age and sex, family history is also known to be a factor in developing sleep apnea. It is estimated that approximately 25% to 40% of all people diagnosed with this condition have some family member that has it, which means that there is an inherited tendency, most likely due to anatomical features.

In terms of ethnicity, sleep apnea is more commonly found in people who are Hispanic, Pacific Islanders and African-Americans. Whites are less at risk of developing this condition, according to demographic research.

Other Conditions and Causes

Sleep apnea is also associated with other conditions such as high blood pressure, heart attack, diabetes, stroke, nocturnal angina, gastroesophageal reflux disease, heart failure, abnormal rhythm of the heart and hypothyroidism. Interestingly, it is estimated that half of all people that are diagnosed with sleep apnea have hypertension or high blood pressure and if these conditions are not treated, they can both cause the development of the other.

The difficulty breathing while sleeping is also associated with daytime sleepiness, which means that people are more at risk of depression and motor vehicle accidents.