The cause of Multiple Sclerosis (MS) is still unknown. However, research points to the following MS causes: 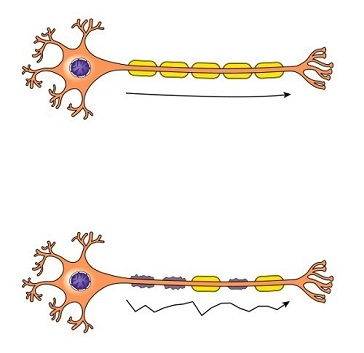 The aim of this article is to discuss how these factors may contribute to the development of MS. Below we look at some of the main causes of MS.

MS is not hereditary. However, genetics are thought to play a role in the development of MS.

Exposure to certain viruses, microbes, and bacteria may cause MS. Some types of viruses are associated with the demyelination and inflammation that are characteristic of MS. Therefore, it’s presumed that these viruses could be a triggering factor for the development of MS.

Many viruses have been investigated to determine whether they are involved in MS. These include measles, human herpes virus -6, canine distemper, Epstein-Barr, and Chlamydia pneumonia. While some evidence exists that viruses do play a role in the disease, none have been proven to be the direct cause as of yet.

The immune system attacks the myelin coating around nerve cells in the central nervous system in those with MS. Researchers have been successful in identifying the immune cells that lead to this particular attack. The factors that cause these cells to attack and their receptors have also been identified.

Extensive research is still being conducted to learn more about the immunologic factors related to MS. This research mainly focuses on the functioning of these cells, how they contribute to the disease, and how to slow down or stop these processes entirely.

Scientists who work on disease patterns, called epidemiologists, are constantly looking at demographics, geography, genetics, and infection variations in an effort to understand how environmental factors play a role. Studies have not found conclusive evidence for environmental factors that trigger MS. However, the existence of MS clusters (where a majority of MS cases occur in specific locations or time periods) points in this direction.

Interestingly, Vitamin D may play a role in MS development. It’s been shown that those living closer to the equator have higher levels of Vitamin D because of increased sunlight exposure. Vitamin D supports immune function and can decrease the risk of autoimmune diseases such as MS.

MS is also more common in certain ethnic groups and populations. MS is most common in Scandinavia, Scotland, and Northern Europe.

Other Causes of MS

Additional evidence points to other causes of MS, including hormones.

While the causes of MS are still unknown, it’s likely that several factors are involved in the development of this autoimmune disease. Research is ongoing in many areas, including epidemiology, immunology, and genetics. In order to determine a cure for this disease, researchers need to understand why the disease is developing and the cause of this disease. If they are able to determine the trigger, they may find the way to slow down or completely stop this disease altogether.

To read more about the possible causes of MS, please visit the links below: