Diseases & Conditions
Sleep Disorders
Sleep Apnea
✓ Evidence Based
Sleep apnea is a disorder that many people suffer from. Even though the condition is not so severe on its own, it has a potential for serious complications is it is not treated. The condition is characterized by periods of time when the person stops breathing while asleep. These periods are not long but can be very frequent and of course, bad for the body. 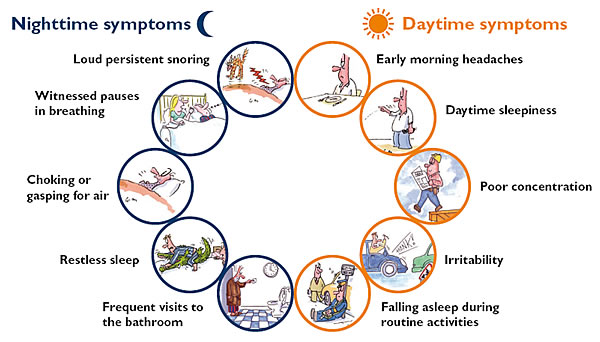 People who suffer from sleep apnea experience feelings of fatigue and sleepiness during the day. Aside from these, there are also many other sleep apnea symptoms that we are about to discuss in this article.

Many of the symptoms of sleep apnea occur while people are asleep and are hardly noticeable. The person may experience difficulty breathing, but not notice it because the body somehow adjusts to it while they are sleeping. This is why in the majority of cases, it is usually a family member that notices the signs of sleep apnea.

Before we discuss the symptoms of the condition, we should first mention the risk factors for this condition. Generally speaking, sleep apnea develops in everyone, but some people are more at risk of developing the condition and the symptoms than others.

People are more at risk of developing sleep apnea is they are obese or overweight. If the body mass index is 25 or more, the person has a greater chance of having difficulty breathing while asleep. Additionally, people with a neck size of 16 inches and more are at bigger risk, since such necks have more of the soft tissue that is known to block the airway.

As we said, anyone can develop sleep apnea, which means that this condition can occur at any age or sex. Still, it is most common in middle age and young adulthood. Also, it is more common in men than in women.

Of course, the last reason why one would develop sleep apnea is family history. This is also a heritable condition, which means that if a family member has this syndrome, you have bigger chances of developing it.

Signs and Symptoms of Sleep Apnea

The most common sign of sleep apnea is snoring, usually loud and chronic. In most cases of sleep apnea, people snore for a while, after which they pause which is followed by gasping and choking. This is usually a result of the returning of normal breathing and the choking may indicate gasping for air that the body has been limited for in the time of the obstruction.

Doctors often recommend that sleep apnea patients sleep on their side since snoring is usually loudest when they sleep on their backs. Additionally, this position is known to be better in terms of gravitation, so that the person can breathe more easily.

Since people are asleep while they snore, they cannot notice the frequency or severity of this symptom. This is why it is usually the person who is in the room that first notices the symptoms of sleep apnea.

Of course, not everyone that snores has this condition. Even though loud snoring is the most common symptom of sleep apnea, people can snore for many reasons. Snoring is actually a vibrations sound that occurs in the upper respiratory airways while a person sleeps, mostly caused by partial obstruction or blockage.

The tissues of the tongue or the throat become more relaxed when the person is asleep. When this happens, these fatty tissues fall back into the airways, which can cause sleep apnea by restricting the airflow. As the airflow is restricted, there is a period of a few seconds when the person stops breathing and the oxygen levels in their body drop.

People rarely wake up when they have this symptom. Even though their brain will partially be alert because it will have to respond to the oxygen deprivation in the body, you will most probably not even realize that you have stopped breathing for a little while. Still, the bad sleep comes with many bad results in terms of quality of rest and functioning throughout the day.

Sleep apnea’s pauses in breathing occur from five to 30 times in an hour. In order for a person to be diagnosed with this condition, their apnea events would have to be frequent and most usually last up to 10 or 20 seconds at a time.

If you snore a lot and feel tired and sleepy once you wake up, you may be suffering from sleep apnea. In such cases, even when a person sleeps a good amount of time, let us say 9 hours, they can still feel tired once they wake up because the pauses in breathing ruined the quality of sleep. Therefore, one of the most common symptoms of sleep apnea is actually EDS or excessive daytime sleepiness, characterized by overwhelming, chronic daytime fatigue.

EDS comes with yet another group of symptoms such as a general lack of energy, difficulty moving and walking in the morning, having the need to take frequent naps during the day, difficulty concentrating on important things and dozing off at inappropriate times.

Headaches are also a common symptom of sleep apnea. When people stop breathing during the night and do this often, the brain is not well provided with oxygen. Low levels of oxygen in the brain will eventually initiate blood vessels widening and cause headaches as a result.

High blood pressure or hypertension is very commonly linked to sleep apnea and comes as a result of the same reasons as headaches. When the brain has to wake up from sleep because it is derived from the sufficient amount of oxygen it needs, this can cause a spike in pressure. The high blood pressure comes as a result of the brain trying to restart the system and make it work again. Since in most cases of sleep apnea this happens often during the night, the body constantly restricts the blood vessels. This causes the blood pressure to persist being high even when the person is no longer experiencing difficulty breathing and is awake.

As we have previously stated, obesity is usually directly linked to sleep apnea. Even though this is actually a risk factor and one of the main causes of sleep apnea, obesity can actually be a sign that will lead the doctor to check for sleep apnea if you are experiencing the other symptoms in this article.

Excess fatty tissues in the body build up in the throat and the neck of obese or overweight people. Once these excess tissues fall back into the airways while a person is asleep an obstruction of airflow occurs, which leads to events of apnea.

Seeing that this condition actually results in bad quality of sleep, it is no wonder that patients who suffer from sleep apnea experience mood swings and changes in emotions and behavior. People who cannot rest properly due to sleep apnea are highly irritable, short-tempered, anxious and experience mood swings. These symptoms being chronic often lead to even depression.

Some of the less common signs and symptoms of sleep apnea include:

There are several symptoms that are characteristic of children who suffer from this condition. In children, sleep apnea can cause:

If you or your child is experiencing any of the abovementioned symptoms, this is the best time to contact a healthcare professional who specializes in sleep. In order to diagnose sleep apnea, sleep specialists perform a sleep study on patients.

If you leave this condition untreated and avoid the symptoms, sleep apnea can cause many other complications and even be fatal. Even though it is difficult to be diagnosed and even noticed by the patients themselves, sleep apnea can be a serious condition if one does not take care of treating it. Sleep apnea is known to increase the risk of arrhythmias, gastroesophageal reflux disease, strokes, heart failure, and heart attacks. At this point, there are many treatments for the condition and they are extremely effective, one of them being the continuous positive airway pressure. Aside from this one, there are also many alternative treatments and lifestyle changes one can make in order to treat the condition.

But how can you know that you are experiencing symptoms of sleep apnea? Actually , you cannot know for sure. As we said, not every person who snores does so because of this condition and not everyone experiences the same symptoms even if they do have the condition. Therefore, discussing your symptoms with the doctor is the best way to discover if you are a sleep apnea patient and need medical attention.

You can always ask your sleep partner to keep track of your sleep and see if you snore, how loud you snore and how frequent this is. If they notice that you grasp for breath after a pause from snoring or make any other unusual signs, you may be experiencing an apnea episode. If you do not have a sleep partner, you can always record yourself sleeping.