Acid reflux occurs when acidic contents from the stomach leak up into the esophagus, a muscular tube connecting the throat to the stomach.

The stomach and esophagus are joined by a muscular band called the Esophageal Sphincter. This is a circular band that allows food and saliva to pass into the stomach while preventing the acidic contents of the stomach from rising back up into the esophagus. 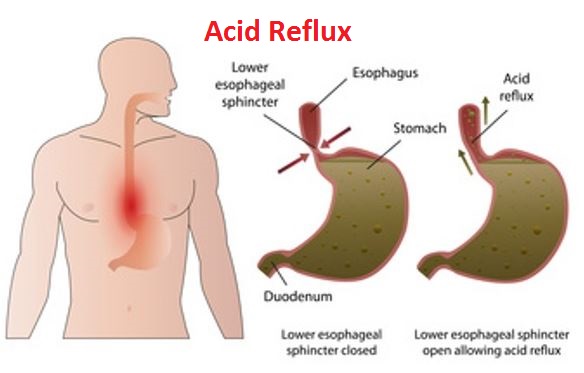 There are many factors that can cause or worsen the symptoms of acid reflux. The most common causes are:

Eating large meals can put added pressure on the stomach and esophageal sphincter, increasing the chances of experiencing reflux. Avoid over-eating by eating small, frequent meals and snacks throughout the day, every 3-4 hours.

2. Lying Down After Meals

It is quite obvious why gravity would affect the stomach’s content. When a person lies down after a meal, gravity is no longer helping to keep the stomach contents from rising up into the esophagus. This increases the likelihood that someone will experience reflux after eating. Try to avoid slouching or lying down for at least 30 minutes after a meal. If you experience nighttime reflux, aim to have your largest meal at least 3 hours prior to bedtime.

A hiatal hernia can cause the acidic contents of the stomach to back up into the esophagus, causing symptoms of acid reflux. Symptoms of a hiatal hernia include discomfort, burping, belching, nausea, vomiting, and regurgitation of acids.

The causes of a hiatal hernia are unclear but may be caused by a weakening of the diaphragm due to age, trauma or injury to the diaphragm, or persistent pressure caused by chronic coughing, heavy lifting, or vomiting.

Smoking has been linked to increased acid reflux symptoms for several reasons.

First, smoking can relax certain muscles in the body, including the esophageal sphincter needed to prevent reflux. When this muscle relaxes, there is an increased chance that the acidic contents of the stomach will back up into the esophagus and cause reflux.

Smokers are also known to produce less saliva than non-smokers. This can increase acid reflux because saliva contains bicarbonate which naturally helps to neutralize the acidity of its environment as it travels from mouth to stomach.

People with asthma are at a higher risk of developing chronic acid reflux, or GERD. Though studies have shown a consistent link between asthma and GERD, the exact relationship is unclear.

Chronic reflux can irritate the esophagus and lung tissues over time, making it difficult to breathe. In addition, acidic contents entering the lungs can stimulate the nerves, causing bronchial constriction. Treatment of GERD in patients with asthma is the same as those without. In most cases, GERD symptoms can be managed well with lifestyle changes and over-the-counter medications.

There are many foods linked to the symptoms of acid reflux. Such foods include:

Be sure to seek medical advice if your symptoms are frequent and/or severe.