A proper diagnosis is a fundamental step in the management of a patient’s illness. A diagnosis can be described as the identification of the cause or the process causing a disease. It follows general guidelines established by medical associations and physician, in general, tends to follow the same steps. However, patients may seek medical assistance in two different ways. Either as a screening evaluation before the disease appears or at a very early stage. Or, when the patient presents symptoms and seeks medical assistance.

The natural history of some diseases, for example, the common cold, does not allow an adequate screening. Additionally, screening for the common cold is not fundamental and provides would provide low economic benefits. Other diseases like breast cancer, with a progressive natural history, do allow for screening. Also, this screening will prove essential in the patient’s outcome and provides great economic benefits to the patients and society in general. 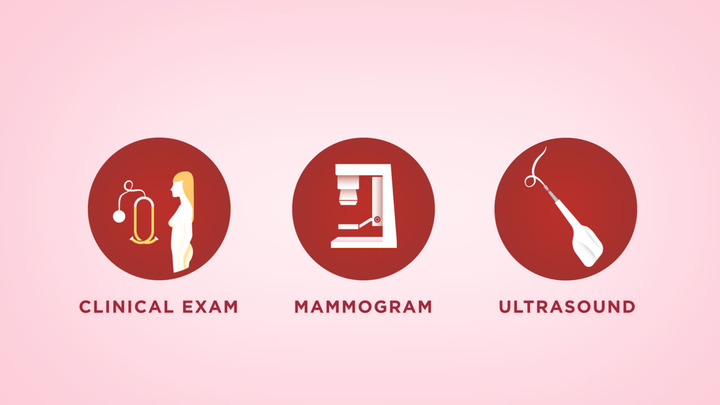 Currently, in most countries, patients are recommended to seek screening to prevent worse outcomes. This proves essential as the earlier a diagnosis is done; its treatment is usually easier. Nevertheless, the step in both cases, whether a patient seeks medical assistances before the appearance of signs or after, the diagnosis of breast cancer consists of the same steps, an initial evaluation of the risk factors in the patient followed by a physical exam of the patient and later the use of several testing procedures to evaluate the patient.  These tests for breast cancer include imaging studies, biopsies and additional tests required to identify the type of breast cancer. Finally, by integrating all the previous evaluations of the patient, if cancer is identified in the patient, the physician must determine the stage of breast cancer.

The evaluation of risk factors ins fundamental in breast cancer diagnosis and management because it will determine some decision of the clinical management of the patient. Depending on the patient´s risk, screening for breast cancer may vary. If the patient has relatives with a genetic predisposition or any that have suffered breast cancer, this could be an indication that screening at earlier ages might be beneficial. Also depending on which genetic predisposition the patient’s risk may be higher or lower. This is quite important because even though screening through mammography is essential in early diagnosis, it has been suggested it could increase a patient´s risk due to exposition to radiations. Additionally, another test such as genetic tests should not be done at random because in some population the result could be irrelevant and only cause emotional distress to patients. This is without considering the large economic cost of performing such a test.  Therefore, the physician has the responsibility to identify whether a patient truly needs to perform a screening test based on the risk factors.  Risk factors will also guide interventions oriented to lower a patient’s breast cancer risk.

Following the evaluation of risk factors, a physical exam is the next step in the diagnosis of breast cancer. The physical exam of the breast consists only of inspection and palpation; in both steps, it is essential to evaluate the patient in several positions. The different positions will allow identifying certain findings in both parts of the physical exam. The physical exam should be done in both standing and ­­­­lie down. Additionally, while standing it is important to evaluate the patient with their hand over their head and with their hand on their hips. The first standing position will allow the physician to observe subtle superficial findings in the nipples or the skin around. In contrast, the second standing position, hands on their hips, will allow identifying findings in the deep planes of the breast.

There are several aspects to consider during a clinical inspection in order to diagnose breast cancer. One of these is the symmetry of the breast. Even though slight variations in the size of the breast of patients might exist, if these variations become too large, they might be a sign of breast cancer. Additionally, all the following parts of the inspection need to be evaluated according to symmetry because it can help to identify if it’s a malignant finding. Another aspect to consider, are the possible skin changes found in the patient´s breast. For example, in Paget´s disease, redness and skin flaking can be identified during the inspection.

Masses can also because other findings observed in the physical exam of the patient. Dimpling and puckering in the skin might be observed in a patient’s breast, as a mass pulls tissue to deeper planes. Or the opposite, lumps that are large enough might protrude from the breast. Finally, during inspection, the nipple might be the site of numerous findings such as retraction, inversion, and discharge. Nipple retraction and inversion, like the dimpling of the skin, might indicate a mass pulling the nipple in. However, some patients are born with nipple retraction or inversion. Therefore, in other, for this finding to be significant, it must have appeared recently. Finally, nipple discharge needs to be studied in detail, determining if it’s a unilateral, bloody or spontaneous.

After inspection, in a proper breast physical exam palpation follows. Palpation is a fundamental step in the diagnosis of breast cancer.  It allows the identification of masses in a patient and also helps identify in surrounding lymph nodes are affected. Because of this, palpation during the diagnosis of breast cancer consists of two parts, the evaluation of the breast itself and later of the surrounding lymph nodes.

To evaluate the breast, it is important to evaluate the whole breast, as defined by its anatomical boundaries. The anatomical boundaries are, in a cranial-caudal aspect from the inferior edge of the collar bone to the 4th rib and in a medial-lateral aspect from the border of the sternum to the anterior axillary line. There are numerous ways in which the palpation of the breast is done such as the circular movements or the lawnmower examination but as long as the whole breast is evaluated it does not affect the evaluation of a patient.

If a lump is identified it needs to be described in a detailed manner. Lumps can be described, like finding in breast inspection, as symmetrical or, with regards to a temporal aspect, recently appearing. Other descriptions upon further palpation of the mass need to consider if it is large, irregular, or firm.

Either as a result of the previous parts of a patient’s evaluation or simply as a routine screening test for breast cancer, mammography is frequently performed to evaluate patients. Current mammography is based on digital x-ray based imaging with compression to observe the breast tissue. There are two standard radiological views, the medial-lateral-oblique, and the cranial-caudal. The combination of both positions will permit the identification of the quadrant containing the observed lesions.

Findings are evaluated to differentiate benign findings from malignant findings. Identifying asymmetric densities, distortion in regular breast architecture, changes in parenchymal contours and find calcifications are some of the goals when performing mammography. Stellate or speculated lesions resulting in architectural distortions are often identified as possible malignant lesions. Calcifications may or may not be associated with a malignant process. As a result of the interpretation of the mammography, the radiologist in the report will provide a result in the BIRADS score. The BIRADS score is rated from 0 to 6. A score of 0 represents mammography that cannot be interpreted and will probably require another mammography. The other scores range from the lowest risk of breast cancer (1) to the highest risk of breast cancer (6).  This score will be particularly relevant in determining the need for a biopsy.

Even though mammography is an essential imaging test for breast cancer, it can have some issues regarding its use. One of the most common aspects is the breast density in women. Breast density refers to the degree of fibro-glandular density found in the breast tissue. Mammographic density has been classified from level 1 to 4, 1 having the lowest density and 4 being extremely dense. Densities can make the interpretation of mammography extremely difficult as both the breast tissue and the lesions are white. In these cases, it might be useful to use another imagining test for breast cancer.

Other imaging tests for breast cancer are either an ultrasound or magnetic resonance. Regardless, they are not used as often, they do have their indication in the diagnosis of breast cancer. For example, aside from dense breasts, sometimes cyst masses might resemble solid tumors. An ultrasound might be a useful test to differentiate between the two. Regarding magnetic resonance, it might be useful in patients with a very high risk of cancer, the degree of chest wall involvement or to evaluate chemotherapy progression.

The only way to perform a definite diagnosis of breast cancer is through a biopsy.  A biopsy is the most definite test for breast cancer, but it is only indicated in patients with a BIRADS of 4 or higher. There are three types of biopsy that can be done to study breast tissue masses, fine needle aspiration, core needle biopsy, and excisional biopsy. Usually, due to its utility in describing the histological architecture and that is not a surgical procedure, a core needle biopsy is preferred. From the biopsy, lots of information can be acquired to establish a complete diagnosis of breast cancer. A biopsy will determine whether the mass is cancerous or not. If it is cancerous it will determine if it is invasive or in situ along with the histological classification of the tumor. Additionally, recently thanks to molecular technologies, the identification of the receptors allow a molecular classification.

The final step of a breast cancer diagnosis is the staging of cancer. This step is done by using the TNM staging, by identifying the size of the main tumor (T), the number of lymph nodes affected (N), and if cancer has metastasized (M).  Staging can be done initially through a patient’s history, physical examination and imaging study of breast cancer. But, staging will be more precise when it is done pathologically by the histological evaluation of tissue extracted from surgery.

Staging is a fundamental step of breast cancer diagnosis because the approach taken to treat a patient will be based on the stage of breast cancer. Particularly for breast cancer, the treatment carries a tremendous emotional and physical load on the patient. Following the side effects of chemotherapy or the results of the surgical procedure, sometimes patients need an evaluation from a psychiatrist. Therefore, a patient should not be subject to treatment unless it is absolutely necessary.

Diagnosis of breast cancer requires extensive exploration and study of the patient. It is a multistep process in which initial steps will determine the others that follow. Numerous details of the patient’s genetics, lifestyle and expositions are several of the risk factors that will determine which diagnostic test of breast cancer will be used.  The physical exploration, imaging tests, and biopsies will all aid a physician in determining the complete diagnosis of a patient, which culminates with the staging of cancer. Staging will prove to be one of the most important procedures in a patient’s life. As their prognosis and management will depend on the development of cancer. To avoid diagnosing patients in the late stages of breast cancer, screening efforts must continue, as prevention proves to be the most efficient cure for breast cancer.