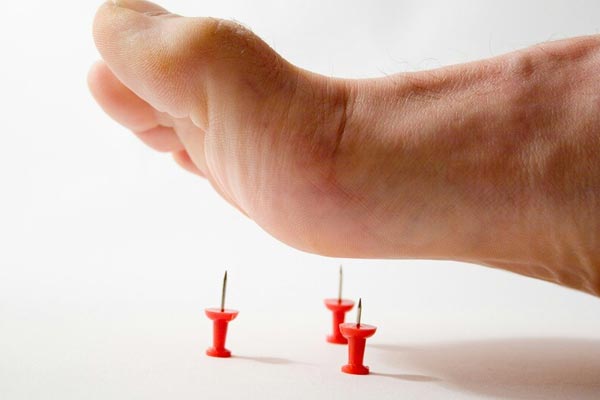 In cases of temporary paresthesia caused by prolonged pressure applied to a nerve, something we call “my legs have fallen asleep”, the treatment is quite easy: you’ve got to remove the pressure and restore the circulation through little exercises, stretches or massages of the affected limb (3). This easily disbands the tingling and pins and needles sensations. It all changes when you’ve got to deal with chronic paresthesia, because it’s not the paresthesia in itself that should worry you and your doctor, but the underlying cause of it, like we were discussing above.

Chronic diseases such as diabetes can trigger paresthesia (4). Also, complications resulting from the use of treatments such as chemotherapy can cause paresthesia (5). In this case, if the diagnostic is right and the symptoms are not severe, anti-inflammatory medications should be enough. The most effective are ibuprofen or aspirin (6). Massage and acupuncture might also play a good part in relieving some of the symptoms of paresthesia. Self-aromatic-oil massage can also help, but in cases of serious paresthesia, acupuncture is proved to work (7).  We found an example of a post-implant facial paresthesia case which was treated with acupuncture therapy. The patient reported paresthesia of the inferior alveolar nerve after 2 years from an implant surgery. The patient received acupuncture treatment for 4 months, with the use of 6 different points. The study shows that only after four sessions, the area of paresthesia reduced in size  (8).

Antidepressant medications such as amitriptyline can be administered to people with more serious paresthesia (9). Yes, these are the types of medications usually given for the release of depression, but they could be effective, in lower dosages, to relieve paresthesia. If you’re wondering why they work, it’s because they help alter a people’s perception of pain. Even codeine or other opium derivatives can help.

Moreover, there are a lot of studies on whether the human nerve growth factor can help damaged nerves. First introduced in 1954, the human growth factor term is a nucleoprotein particle believed to enhance growth and differentiation in sensory and sympathetic nerve cells (9). Two and four years later, scientists identified 2 very important sources of this factor in snake venom and mouse salivary glands. Another 2 years later, they’ve called this factor a protein and it is believed to help heal many nerve and sensory afflictions. (10)

The symptoms of paresthesia can also be alleviated with the use of nutritional therapy. That means administering important Vitamin B complex (11). This should be done with care and with the oversight of a doctor, since the B12 vitamin overdose is known to cause paresthesia (12). Moreover, people who are undergoing a treatment and therapy for paresthesia should avoid drinking any kind of alcohol.

Paresthesia can also be the effect of other types of treatments

We’ve been talking about various ways of treating paresthesia, but it’s also good to know that paresthesia can occur as a secondary effect of various types of treatments for various afflictions. One example is the treatment of seizures with vague nerve stimulation. In this case, paresthesia is an adverse event. Another example is the use of treatment medications as anti-convulsant drugs, topiramate, Motexafin lutetium used in the treatment of another disease called coronary atherosclerosis. (13)