Diseases & Conditions
Nervous System Conditions
Parkinson’s Disease
✓ Evidence Based
As individuals grow old their susceptibility to disease increases. Impairments in the nerves and muscles can occur, but the widespread changes that happen with aging can make a diagnosis of these impairments difficult.  For example, in Parkinson’s disease, a disease of the nervous system that influences movement control, a medical specialist must assess many symptoms that could overlap with other disorders. As research becomes more advanced and technology continues to develop, however, accurate diagnoses are possible. 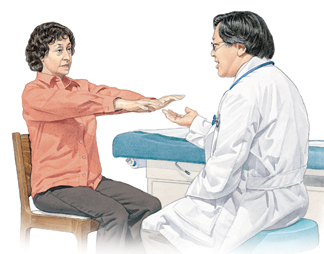 Parkinson’s disease must be diagnosed by a medical professional, but research is making this easier and more accurate. Diagnosis can also be made by performing an autopsy after an individual has passed away.

In this phase, the patient does not show any signs or symptoms of Parkinson’s disease, but changes are starting to take place in the nervous system.

Here, signs and symptoms are beginning to show. This usually includes mild movement-related and non-movement related symptoms. In the prodromal phase, a diagnosis can be very challenging to make. therefore it is important that the medical professional performs a detailed study of risk factors, and signs and symptoms.

In this phase, the signs and symptoms of Parkinson’s disease become obvious and the medical professional is usually able to make an accurate diagnosis. Clinical diagnosis requires a detailed exam of the patient in order to distinguish Parkinson’s disease from other, similar diseases

Apart from risk factors, there are also “protective factors” that could protect from developing Parkinson’s disease. These include caffeine, antioxidants, alcohol, and smoking. “Protective factors” is placed between quotation marks because there is not enough research to support these claims.

Signs and Symptoms of Parkinson’s Disease

A physician can attempt to diagnose Parkinson’s disease beginning in the prodromal phase. However, it is important to emphasize that diagnosis in this phase is very rare because certain signs and symptoms typically appear in the clinical phase.

Symptoms can be classified as movement-related (motor) and non-movement related (non-motor). The non-motor manifestations include olfactory dysfunction, sleep alterations, and mild autonomic symptoms.

Clinical evaluation of olfactory dysfunction can be done through a look at the patient’s history or more objectively through several tests and measures, which include the University of Pennsylvania Smell Identification Scale or the Phenyl Ethyl Alcohol or Detection Threshold. The University of Pennsylvania Smell Identification Scale requires the patient to smell and identify 40 items. They are scored on a range from 0 – 40 and compared to results from others in the same age and gender group.

Like olfactory dysfunction, Rapid Eye Movement behavior disorder can be identified through the patient’s history or medical tests. Medical testing is done through a polysomnography. The results of the polysomnography will show abnormal muscle activity during sleep.

Motor signs can be key to identifying patients who are developing Parkinson’s disease, especially in the prodromal phase. The presence of micrographia, which is defined as smaller than normal handwriting, has been used to help diagnose Parkinson’s disease for many years. Furthermore, changes in size, duration, speed, and fluency of handwriting can all be used to determine changes in handwriting.

By the time the patient has reached the clinical phase, many signs and symptoms become very apparent. Criteria for Parkinson’s disease diagnosis are typically used to make a diagnosis.

First, the clinical signs and symptoms must develop in a progressive manner, meaning that they should increase in severity over time. If they are not progressive, they could point to another disease that is more acute, or short-lived.

Additional cardinal signs and minor signs are used in diagnosing Parkinson’s disease. The exact number of signs needed from each category vary, yet the signs assigned to each group remain the same. All cardinal signs of Parkinson’s Disease are motor signs and include the following: bradykinesia, resting tremor, cogwheel rigidity, and postural instability. Minor signs include both motor and non-motor signs, such as hypophonia, drooling, olfactory dysfunction, autonomic changes, and neuropsychiatric manifestations.

During an evaluation, the physician should consider excluding criteria that might suggest another diagnosis. For example, if a patient presents with Parkinson’s disease signs and symptoms along with early dementia and hallucinations, this may suggest Dementia with Lewy Bodies.

Other exclusion criteria include supranuclear gaze palsy, abnormal imaging results, or a history of repeated strokes. One of the most important exclusion criteria is no response to taking the medication levodopa. Parkinson’s disease is highly responsive to levodopa, therefore if a patient does not respond to this medicine then they might investigate for a different diagnosis.

After diagnosing a patient with Parkinson’s disease it is useful to evaluate its severity. Numerous scales have been developed to quantify disease severity.

For many diseases, physicians can rely on a variety of testing techniques to confirm a diagnosis. This is not the case with Parkinson’s disease, as testing technology is not as useful. Physicians must mainly rely on clinical evaluations. However numerous studies are being performed on imaging techniques, biological markers, and mechanosensor technologies that can be used to diagnosis Parkinson’s disease.

Imaging is one of the more recent developments in Parkinson’s disease testing. Currently, research is focused on functional imaging technologies (PET and SPECT), MRI, and transcranial sonography.

Another testing technology currently being developed is the use of biological markers. Biomarkers could be used in studying at-risk patients in the preclinical or prodromal phases. They could also be used as a tool to diagnose in the clinical phase.

These markers are extracted from body fluids such as urine, blood, or cerebrospinal fluid. However, biological markers from the cerebrospinal fluid are thought to be of greater value due to its location in the body. Biomarkers include a wide range of biological molecules, such as alfa-synuclein protein, DJ-1 protein, inflammatory markers, and many more that are related to the development of Parkinson’s disease.

Finally, a new technology that is at the forefront of Parkinson’s disease diagnosis is the use of mechanosensor. In an attempt to identify changes in movement as early as possible, many devices are being developed such as this wearable technology. This includes keyboard tests, gait sensors, voice analyzers, and many more. These tests attempt to gather information about changes in movement that only become apparent after the disease has progressed.

These tools in Parkinson’s disease diagnoses seek to identify abnormal findings in patients to aid in an early diagnosis. However, it is important to consider the practicality and cost of each.  Functional studies are not widely used in medical facilities and are quite expensive. In contrast, the mechanosensor technology could be relatively cheap to implement. While there is no cure for Parkinson’s disease, recent research and technological advancements have allowed for a more clear diagnosis and better outcomes for those that develop this disease.

To read more about Parkinson’s disease and its diagnoses, please visit the links below: