Prostate cancer is also one of the hardest cancer to diagnose early. This is explained by a slow and relatively asymptomatic period, in which clinically no evidence of cancer will be found. If clinical manifestations of prostates cancer are observed, they can be ignored or attributed to other causes such as old age.  Additionally, current screening methods have not been proven to lower mortality in patients. This is why patients and physicians must be aware of the signs and symptoms of prostate cancer.

Signs and Symptoms of Prostate Cancer 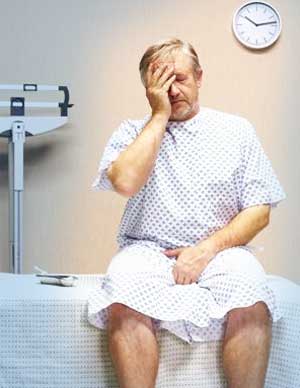 The anatomical relationships between the prostate and other nearby structures. The prostate is a glandular sex organ found near the base of the bladder and the anterior rectal wall. It has glandular and muscular tissue associated with its function, producing secretions. The glandular and muscular tissue in the prostate is involved in its regular physiological sexual function. Along with the seminal glands and the bulbourethral glands, the prostates secrete part of the fluids in semen. Additionally, the glandular tissue is the histological origin of most prostate cancer (about 95% of all prostate cancer are adenocarcinomas).

It can be divided into three lobes, two lateral and a single middle lobe. The left and right lateral lobes are in contact with the anterior rectal wall, because of this a physician is able to evaluate the lateral lobes through a rectal exam. It is described as a convex structure dived into two regions, left and right lateral lobes, by a shallow division. However, the middle lobe is found anteriorly, therefore it cannot be evaluated in the physical exam. The prostate, because of nearness to the bladder, can also cause diverse urinary habit alterations. Other signs and symptoms of prostate cancer arise from the lymphatic drainage of the prostate gland.

Prostate cancer will produce alterations due to the abnormal behavior of malignant tissues. In particular, either the excessive growth of the tumor mass or the metastasis to other areas will cause the signs and symptoms of prostate cancer.  The growth of the tumor mass can occlude the ejaculatory orifice or the urethra, causing an alteration of regular ejaculation or micturition. Also, it can produce pain as a result of the pressure into other organs and nerves nearby to the gland. Metastasis can also produce a diverse group of signs and symptoms of prostate cancer diversity of clinical manifestations, such as pain in bones or enlargement of lymph nodes nearby.

The clinical manifestation will depend on the TNM stage in which the cancer is found. Even though a precise clinical manifestation will not determine a diagnosis or the specific stage, initial staging and diagnosis is an essential part of the management of prostate cancer. The local manifestations or those resulting from tumor growth will depend on the T or the size of the tumor. This is evaluated from T1 – T4, T1 meaning that clinically or through imaging study prostate cancer in this stage cannot be identified. As the tumor grows it progresses through the following stages, more local signs can be identified. N or local lymphatic node involvement also affects manifestations because depending on the invasion, they can be palpated. Finally, the M, or metastasis will determine the presence of metastatic signs such as pain or distal lymph node enlargement.

The underlying causes which are associated with the signs and symptoms of prostate cancer can be classified into local manifestations, metastasis manifestations, and signs evaluated by the physical exam.

As previously stated, the pressure of tumors in a T2 stage or higher can cause local signs and symptoms of prostate cancer. Among, these local manifestations are changes in urinary habits, hematuria, sexual dysfunction, pain, and neurological dysfunctions.

Changes in urinary habits are one of the most common and uncomfortable clinical manifestations of prostate cancer. These are the result of the prostatic obstruction of the urethra. Three of the clinical manifestations, poor stream, urgency, and frequency are grouped together as prostatism. The poor stream is a cardinal symptom of prostatic obstruction; it is defined as the reduced rate of urinary flow during urination. The reduction in the rate of urinary flow can manifest as lowering the strength and volume of the urinary stream and a longer time need to urinate. Urgency is another symptom of prostatic obstruction; patients describe it as the need to begin micturition the moment the desire arises. The last symptom of prostatism is an increased frequency of micturition. Because of the obstruction of the urethra, inadequate emptying of the bladder causes an accumulation of urine in the bladder. As a result, the functional volume or the volume of urine needed to trigger the need to urinate, decreases, increasing the frequency of urination. This can also manifest nocturia, as patients feel the need to urinate in the middle of the night.

Additionally, changes in urinary habits also include other symptoms of prostatic obstruction are hesitancy and dribbling. The first, hesitancy, is described as the inability to quickly begin urinating. The patient might rush to the restroom to urinate due to urgency, but once he tries to begin to urinate, for a period of time he will not be able to. The other symptom of prostatic obstruction is dribbling, or extensive release of drops of urine posterior to urination. In many cases, the patient will wait for the drops to stop but as his patience disappears he might stop waiting and stain his underwear.

The clinical manifestations included as changes in urinary habits are described as symptoms of prostatic obstruction and not as symptoms of prostatic cancer because it is important to recognize that other conditions also produce these signs. In particular, the benign hypertrophy of the prostate gland can also produce the same signs and symptoms. However, the progression across the time of each will differ. Changes in urinary habits manifest as non-fluctuating clinical manifestations in prostate cancer. In contrast, in the benign hypertrophy of the prostate gland, the severity of the symptoms fluctuates.

A common sign of prostate cancer and benign hypertrophy of the prostate gland, or benign prostatic hyperplasia is hematuria. Hematuria is defined as the presence of blood in the urine. Hematuria can be microscopic or macroscopic, depending on the quantity of blood in the urine. Patients will only be able to observe hematuria macroscopically, therefore initially hematuria will not be detectable, except in casual findings. This is similar to the general presentation of prostate cancer, in which slowly signs and symptoms will appear.

Other manifestations include pain and neurological dysfunction, usually resulting from large malignant tumors. Pain can manifest in the lower abdomen and the perineum, and result either from tumors pressing directly on other structures or neurological structures. Pressure on neurological structures can also cause other signs and symptoms of prostate cancer, such as urinary incompetence or lower limb weakness.

As prostate cancer progresses, other structures outside the gland can be affected. Some of these structures are the lymph nodes. As previously stated the invasion of lymph nodes defined the N part of the TNM staging. Local lymphatic nodes can become enlarged as a result the physician or even the patient might notice this sign of prostate cancer. In particular the common iliac, internal iliac, the external iliac and the sacral lymph nodes are the sites of local invasion.

The other two symptoms of prostate cancer are weakness, fatigue, and weight loss. These symptoms are the result of the wasteful metabolic processes in malignant cells. Weakness, unlike the lower limb weakness caused by neurological dysfunction, is not specific to any part of the body. Along with fatigue, weakness needs can be observed in elderly patients with other conditions. However, weight loss, especially if it causes is unknown, can indicate malignancy in patients. Malignant weight loss is described as unwanted and unexplained.

Patients that present some of the signs and symptoms of prostate cancers, should be subjected to further evaluation. The first step is a physical exam of the patient, in which the physician may identify more signs of prostate cancer through a digital rectal exam.

Due to the anatomical relationships, the digital rectal exam can evaluate the prostate exam. Also, it is a cheap method of studying patients but like with other clinical manifestations, during the T1 stage prostate cancer cannot be identified. Additionally, the digital rectal exam needs to be performed carefully to prevent any injuries to the patient. The physician must also be aware of the anatomical relations to ensure the area examined is the anterior rectal wall. Normally, a physician will feel a slightly protruding, firm, and smooth prostate gland. Also, the physician will palpate the right and left lobules of the prostate.

In contrast, a tumor mass will protrude much more, depending on the size, into the anterior wall. Also, the gland will feel hard, irregular in contour and heterogeneous texture. All of this can manifest as the loss of symmetry between lobules. Other findings include nearby tumor infiltration. The physician will be able to identify a tumor if it is big enough. However, it is not a precise test and should be accompanied by other studies.

Even though screening has been attempted, it has not been effective in lowering mortality. Physicians are not advised to regularly offer digital rectal exams or other screening tests such as the prostate-specific antigen because studies have not shown a significant decrease in mortality rates using these tests.  However, if patients ask for them, have several risk factors, or a patient presents the signs and symptoms of prostate cancer, the physician should provide the test for the patient. The utility of screening tests should not be omitted because they can identify at earlier stages, providing better outcomes.