Prostate cancer is diagnosed when a man suffers from malignant cancer cells formed in the prostate tissues. Prostate cancer treatment can vary depending on the severity of the case, the patient’s general health, and the most recent treatment options.

The prostate is located in the male reproductive system, just below the bladder and in front of the rectum. It is a gland of the size of a walnut that creates the fluid of the semen.

This condition is most common in older men. There are various types of prostate cancer. Statistics say that 1 out of 5 American men is diagnosed with this disease. The most common signs of prostate cancer include a weak urine flow or frequent urinating. However, there are numerous other signs and symptoms that point out to this particular disease.

Treatment for prostate cancer must be carefully planned and the diagnosis must exclude other diseases that are commonly mistaken with prostate cancer. Aside from prostate cancer, many of the known symptoms can often be caused by other conditions. For example, this disease can be easily misdiagnosed with benign prostatic hyperplasia.

As men age, the prostate enlarges and can block the bladder or the urethra. This causes the patient troubles urinating or performing sexually. Even though this is not as serious as cancer, it may still require surgery. 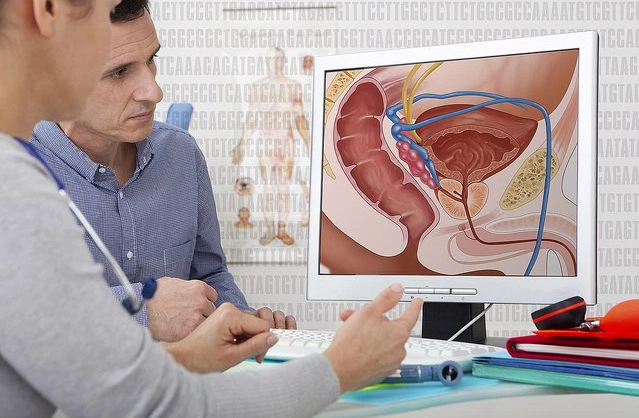 Cancer care involves a team of professionals that work together to set up an overall treatment plan that may or may not combine several prostate cancer treatments. The team is called a multidisciplinary team and involves not only doctors but pharmacists, physician assistants, oncology nurses, counselors, dietitians and social workers too.

Treatment options depend on a variety of factors and in most cases they include additional treatment for side effects of the primary treatment. This is a very important part of cancer care.

If prostate cancer is diagnosed at an early stage and is progressing slowly, there is a big chance that treating will cause more discomfort to the patient than the disease itself. When this is the case, a doctor may recommend active surveillance or watchful waiting as the primary treatment

Most of the treatments for prostate cancer can cause side effects such as impotence and incontinence and this would seriously affect the quality of life of the patient. This is why people that are diagnosed with cancer in early stages often postpone the treatment rather than starting with immediate treatment. This surveillance consists of close monitoring for worsening signs and is recommended in cases where the patients have a long life expectancy and can benefit from the curative local therapy.

This second option is preferred for older men who suffer from other serious illnesses and have a life expectancy of fewer than 5 years. Routine PSA and DRE tests and biopsies are not performed in these cases. Treatment is solely recommended if the patient starts complaining of pain or blockage of the urinary tract and this can include ATD.

There are cases where men start out with active surveillance and then transfer to watchful waiting in order to avoid repeated biopsies and tests. These people too have a short life expectancy.

Generally speaking, the majority of people with prostate cancer survive, but real caution must be taken in order not to make errors about the diagnosis and treatment of this disease. This is why it is crucial that doctors get informed on all other illnesses and the life expectancy of the patient.

Local treatments are performed with the aim to get rid of cancer that is localized in a limited body area. Men diagnosed with prostate cancer in early stages may be recommended to use local treatments such as surgery or radiation therapy to remove the cancer growth completely. However, if these treatments do not work successfully and the cancer is spread outside the prostate, other prostate cancer treatment options may follow.

Local prostate cancer surgery aims toward tumor removal but includes the removal of some surrounding healthy tissue too. This is done in order to eliminate the chance of the tumor spreading outside the prostate. The procedure is performed by a surgical oncologist and the surgery type depends on the overall health, disease stage and other factors.

There are several surgical options that include:

This is a prostate and seminal vesicle removal surgery that may also include the removal of lymph nodes in the pelvic area. There are certain risks of interfering with the sexual function that may occur if this surgery is performed. In some cases, it is possible to perform nerve-sparring surgery that increases the chances of the patient being able to maintain his sexual function after the surgery. Another possible side effect is urinary incontinence.

This surgery is less invasive than the previous one and the recovery time is known to be much shorter. In this procedure, a camera and other instruments are inserted through a keyhole incision made in the patient’s abdomen. Afterward, the surgeon directs the robotic instrument with the purpose of removing the prostate gland and some of the surrounding healthy tissue. This causes less pain and bleeding, but the chances of sexual and urinary side effects are still equally present.

This surgery is also called cryoablation and it consists of freezing the cancer cells. This is done with the help of a metal probe that is being inserted through an incision between the scrotum and the rectum. This therapy is not standard for those who are newly diagnosed with this disease and has not yet been compared with radiation therapy and radical prostatectomy. It can still affect the urinary and sexual functions.

Radiation therapy is a treatment where high-energy rays are used to destroy the cancer cells. This is done by a radiation oncologist, a doctor who specializes in radiation therapy. The schedule of this therapy consists of several treatments given over a certain period of time.

There are a few types of radiation therapy:

This is the most commonly recommended type of radiation therapy when it comes to prostate cancer treatment. It is performed by using a machine that is located outside the patient’s body whose purpose is to focus a beam of x-rays in the cancer area. Some cancer care centers use CRT therapy in which the mapping of the exact location of the cancer is done with the help of computers. This therapy is known to reduce the damage of the radiation to the healthy tissues and organs that are commonly affected by external-beam radiation therapy.

IMRT is another type of beam radiation therapy that uses CT scans in order to perform a 3D picture of the prostate diagnosed with cancer prior to the beginning of the treatment. Then, a computer uses the information about the shape, location, and size of the cancer growth and determines how much radiation is required to destroy it. This therapy allows directing high radiation doses being directed at the prostate without the unnecessary risk of damaging the other, healthy organs.

Proton therapy is also referred to as proton beam therapy and this is a type of treatment that uses protons instead of x-rays. Protons can destroy the cancer cells at high energy. However, even though this is a more expensive method, there is no more benefit from this type of therapy than the traditional ones.

Brachytherapy or internal radiation therapy is the insertion of radioactive sources into the affected prostate. These sources are also called seeds and their job is to give off radiation around the area they are inserted into. They can be used for hours, at a high dose rate or for weeks at a low dose rate. Men with high-risk cancer may be recommended this therapy in combination with others.

Also known as Xofigo, Radium-233 dichloride is a radioactive substance attached to areas that are known to have high bone turnover. This treatment is aimed towards the infected bone only, limiting the damage to the surrounding healthy tissue. The clinical trials done in 2013 showed results of improved survival and reduced bone-related complications as a result of this treatment.

Radiation therapy can cause side effects that are more immediate than others, such as diarrhea, gas, bleeding, bowel movements loss of control, fatigue, and impotence. Most of the side effects go away after a while, but impotence usually remains.

There is no known prostate cancer cure, but another method that has shown to be successful is the systemic treatment called Androgen Deprivation Therapy.

The male sex hormones called androgens are the main reason for prostate cancer growth, so this therapy is used to lower the levels of these hormones in order to slow the rate of cancer growth. The most common androgen known is testosterone and the levels of this androgen in the body can be lowered by surgical removal of the testicles or by taking certain medications that turn off their function.

Patients with high-risk prostate cancer that are undergoing radiation therapy are candidates for this therapy. It can also be given after surgery if the patient has cancer in the lymph nodes. This is usually discovered during surgery. The following ADT should reduce the chance of recurring cancer.

There are several types of ADT, such as:

What comes closest to treating this disease, in most cases, is chemotherapy.

Chemotherapy is the use of drugs that are combined to destroy cancer cells by preventing them from dividing and growing. It gets into the bloodstream to reach the cancer cells. This is done by a medical oncologist that gives the drugs trough an intravenous tube placed in a vein with the help of a needle. This type of therapy usually consists of numerous cycles, recommended and given over a set period of time.

There are several drugs that are standard from prostate cancer. The most common starting chemotherapy drugs include docetaxel and prednisone. Others include Novatrone and cabazitaxel.

The effects of this treatment for prostate cancer depend on the individual case, the dose used, the type of chemotherapy and the treatment length. Side effects include fatigue, diarrhea, nausea, sores in the mouth, vomiting, changes in thinking, sexual issues, pain, hair loss, and blood disorders. These usually disappear after the treatment is finished, but some may come back or develop later.

Most of the men diagnosed with prostate cancer survive, but this disease is still considered to be life-threatening because of the difficulty of finding the right treatment. Luckily, there are many prostate cancer treatment options available and the chances of survival are increasing daily.