Mankind has attempted to discover the cause of disease throughout history in order to treat them. Theories such as the humoral basis of disease or the miasma theory were developed as the result of initial attempts. Until the discoveries by Virchow and Pasteur were made, these previous attempts would dominate in western medicine. Virchow and Pasteur allowed the biomedical sciences to develop a greater understanding of precise mechanisms that resulted in disease. This led to a disease being explained through a single mechanism. Evidently, these explanations would not be enough to explain all cases. For this reason, multifactorial models of disease were created. However, the diverse factors involved in these models could not be explained due to the lack of comprehension of development and comprehension. 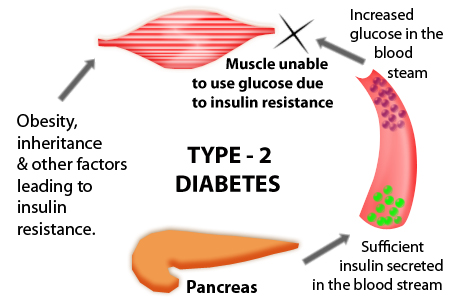 Technological development and scientific discoveries have made it possible to study the multifactorial models of many diseases. This is not the case for type 2 diabetes. Like with many other multifactorial diseases, the complexity of the interaction does not allow current science to determine in what way exactly does the disease develops. Currently, there is a certain degree of certainty regarding the etiology and pathogenesis of type 2 diabetes. Nevertheless, more research is needed to be able to describe precisely what factors and the mechanism by which these factors interact.

The central mechanisms causing type 2 diabetes revolved around the vicious cycle between a chronic hyperglycemic state and insulin dysfunction that progressively appears. Due to the interaction between these two conditions, it has been difficult to identify which of these is the initial event. The only way to begin to answer this question is by understanding the regular process between the two, glycemic homeostasis and insulin function.

Usually, blood glucose levels are increased as a result of food intake. Upon the arrival of the alimentary bolus, cells in the gastrointestinal tract secrete substances known as incretins. Incretins are novel signaling molecules, which induce insulin secretion from the beta cells in the endocrine pancreases. Glucose-dependent insulinotropic polypeptide and glucagon-like peptide-1 are the currently identified incretins. It is important to point out that incretins also have a trophic effect in the pancreatic beta-cells. The effect of these molecules is quick as the result of the action of an enzyme called, dipeptidyl peptidase-4. In this way, incretins stimulate the secretion of insulin previous the process of absorption of food.

Later, upon the absorption of food, glucose levels increase. This increase is detected by the pancreatic beta-cells through the transportation of glucose through a membranous transport protein called glucose transporter 4. Other nutrients such as amino acids and fatty acids can also stimulate insulin secretion in a similar manner.

Therefore, physiologically, food ingestion and increases in sugar blood levels result in the secretion of insulin. Later, the increase in insulin blood levels will result in the numerous effects oriented towards decreasing the glycemic levels and promoting growth in diverse cell populations. Once sugar levels become low enough insulin secretion will decrease.

The vicious cycle related to the causes of type 2 diabetes affects this physiological process through several ways observed in the characteristics of type 2 diabetes patients. One of these is chronic hyperglycemia, which will cause chronically increased blood levels of insulin and will cause numerous complications. The chronic levels of hyperinsulinemia will lead to insulin insensitivity across throughout the body resulting in dysfunction in the homeostasis in glucose levels. This is what is described traditionally as the vicious cycle of type 2 diabetes. However, an additional component to insulin dysfunction has been recently identified impaired insulin secretion in the patients with type 2 diabetes.

Initially, it was thought only insulin insensitivity was involved in the causes of type 2 diabetes. However, impaired insulin secretion resulting from pancreatic beta-cells losses have been identified to contribute to the development of type 2 diabetes. It has been observed in post-mortem studies that patients with type 2 diabetes had lost up to 50% of pancreatic beta-cells. It is believed that this process is the result of a combination of the inflammatory state induced by hyperglycemia, deposits of fats and other substances in the pancreas and a decrease in the incretin secretion.

This additional component in the vicious cycle adds another layer of complexity in the pathogenesis of type 2 diabetes. Nevertheless, the three groups of causes of type 2 diabetes can only be understood through their association with previously described cyclical pathogenic mechanisms.

Many causes of type 2 diabetes are genetic alterations related to insulin´s regulation of glucose homeostasis. They could be grouped according to the function of the structures the specific genes code for. In this way, the genetic causes of type 2 diabetes can be classified as those affecting insulin secretion or those affecting insulin sensitivity.

Another interesting genetic alteration is associated with the melatonin receptor 1B. Dysfunction in this gene is associated with diabetic patients with reduced insulin secretion and disruption of the sleep-wake cycle. Other curious genetic causes of type 2 diabetes are the mutations in the Ankyrin 1 gene. This gene codes for a protein typically expressed in red blood cells. Mutations lead to structural abnormalities such as hereditary spherocytosis. However, it is also through unknown mechanisms it is associated with a sulphonylurea receptor, decreasing insulin secretion.

The mutation of the glucose transporter responsible for sensing changes in glucose levels in pancreatic beta-cells, liver, and kidneys has also been associated with type 2 diabetes.

Genetic alterations of insulin sensitivity have also been identified. However, the mutation of an essential molecule involved in insulin insensitivity, the insulin receptor, is quite rare. Rather, it seems that mutations in the transcription factors that regulate the expression of the insulin receptor predominates.

An example of a mutation in genes affecting the expression of the insulin receptors is found in the High Mobility Group A1 gene. This gene codes for a protein that binds to DNA and permits the formation of a multicomponent enhancer complex. Defects in this gene are strongly associated with a decrease in intracellular levels of insulin receptor mRNA. Also, the defect has been proven to be associated with an increased risk of type 2 diabetes in obese populations.  This has been researched both in vivo and in-vitro on numerous occasions.

Additionally, mutations of other molecules can predispose patients to insulin insensitivity. Among these are the glucokinase regulatory protein and the insulin-like growth factor-1. Other genetic mutations are associated with both type 2 diabetes and diseases associated with the metabolic syndrome. These mutations affect the Fat mass and obesity-associated (FTO) gene, the Krüppel-like factor 14 and the proliferator-activated receptor gamma. However, the FTO gene’s primary effects are mediated through an obesity-related mechanism while the other two have a primary effect on insulin activity.

There is no doubt of the relationship between genes and the predisposition of type 2 diabetes. There are many more genes involved in this but and scientists are trying to identify them. Additionally, the epigenetic of type 2 diabetes needs further research to study how do the prenatal environmental effects on the variation of gene expression are linked to type 2 diabetes.  It has been postulated that genes contribute about 30% of the factors, therefore a multifactorial analysis of the causes would be incomplete without studying the environmental factors that interact with the genetic causes of type 2 diabetes.

The main behavioral factors involved in the development of type 2 diabetes are nutritional habits and physical activity. Physical activity will determine caloric expenditure which is important in maintaining endocrine function active. It is almost universally known that physical activity provides numerous benefits to everyone´s health including, a lower risk of cardiovascular disease, regulation of lipids and glucose blood level, great mental health, etc. Therefore, the beneficial effects of physical activity are numerous and widespread across different health markers.

Physical activity is also associated with something described as the “built environment”.  This term describes the number of infrastructure for transportation and the design of urban spaces. As technology advances, people engage in less physical activities. Additionally, in some countries parks and other recreational areas are not available and have also been associated with sedentary lifestyles. The “built environment” also affects nutritional habits depending on the construction of fast food and other business that offer unhealthy foods.

Unhealthy food causes type 2 diabetes in several ways. An essential characteristic of modern diets related to type 2 diabetes, is the amount of sugar consumed by the population. From a single serving of many drinks sometimes you can get twice the recommended values of sugar in one sitting. The increase in sugar intake can be one of the main factors contributing to constant hyperglycemic states.  Additionally, the excess fats are associated with patients developing dyslipidemias, which in turn are a strong risk factor for insulin resistance in many patients. Both, the excess sugars and fats can also lead to obesity, one of the most important risk factors for diabetes.

However, the location of fast-food establishments and park areas are definitely not the only determinants of behaviors that cause type 2 diabetes. Lots of research has been devoted to the effects of habits learned in the patient´s childhood. Starting from the extent of breastfeeding a child received to the habits formed by parents, these will determine a person´s habit for a lifetime and are often extremely difficult to change.

Additionally, the physical environment can provide with toxicological agents sometimes described as endocrine disruptors. Endocrine disruptors are thought to directly interact with numerous endocrine targets. Many of these effects leading to insulin resistance, obesity, estrogenic abnormalities. All of these increase the risk of developing type 2 diabetes.  Numerous studies have shown the association of type two diabetes to the following substances,  cadmium, arsenic, 2,3,7,8-tetrachlorodibenzo-p-dioxin, numerous pesticides and many others. One of the biggest concerns is that endocrine disruptors can cause effects even if very little concentrations are found in a patient. Finally, many experts argue that endocrine disruptors are one of the main causes of the increase in type 2 diabetes and other disease associated with metabolic syndrome.

Identifying and understanding all of type 2 diabetes causes will require a tremendous effort from researchers. Only some parts of the connections between the factors have been discovered. Additionally, integrating them will require the development of complex models which perhaps will be too confusing for human minds to understand. Solutions revolving around the use of computer-based models have been postulated but are still in an early phase of development. Therefore, currently, the physician will explain the causes of type 2 diabetes as the complex interaction between genes and the environment which leads to a breakdown of the physiological regulation of sugar blood levels.

As such, current therapy is oriented to attend the integral needs of patients suffering from two diabetes. Pharmacological treatment to improve their biochemical disruptions along with improvement in the environments in which the behavioral factors come into play. Even though the type 2 diabetes epidemic has not been solved, the case of patients with successful treatment lets us know currently we are on the right track to understanding the causes of type 2 diabetes.