Worldwide global health agencies are working to control the obesity-related epidemics. Technology and development have brought great progress to mankind but also changes in lifestyles that do not have healthy outcomes. These changes in lifestyles include a decreased level of physical activity along with diets containing food with low nutritional value and high caloric content. Of particular relevance to type 2 diabetes are foods with high caloric content from sugars. The excess sugars in diets and the body’s incapacity to handle it cause and mediate much of the harm caused by diabetes. 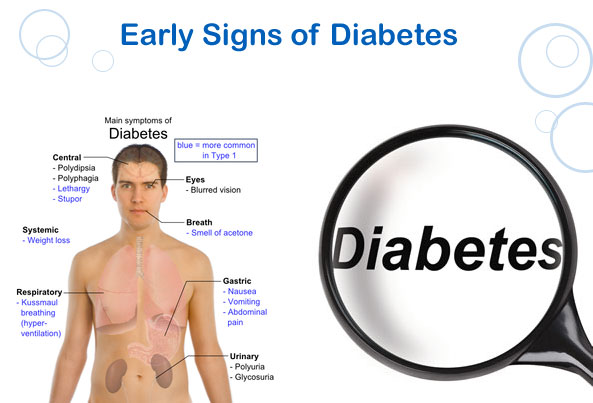 Signs and Symptoms of Type 2 Diabetes

The hyperglycemic state will have numerous consequences on the regular physiologic process occurring in the human body. However, most of these do not appear until the final stages of type 2 diabetes. As a result, patients can live with hyperglycemia while appearing healthy to most. For this reason, many guidelines have been made to identify patients with the disease or at risk of suffering from this disease. Most of these efforts are oriented to the diverse glucose blood test available to identify diabetes. However, it is also of great relevance to know the signs and symptoms of type 2 diabetes to be able to identify patients who have not been diagnosed or patients whose treatment plan is not working.

Signs and Symptoms of Type 2 Diabetes

Polyphagia is a symptom of type 2 diabetes described as frequent hunger sensations that can interrupt a person’s sleep or normal day to day function. The intensity of this symptom can vary greatly, however it is a regular symptom of type 2 diabetes. This symptom is the result of the incapacity of cells to introduce glucose through the plasma membrane. In order for glucose to enter cells, insulin must activate certain receptors, called GLUT, which transport glucose inside. However, type 2 diabetes patients have developed insulin insensitivity, resulting in that regardless of the levels of sugar in the bloodstream the patient’s cells will starve initially. During this initial starvation cells will send the brain signals relaying “starvation” signals and the brain will produce the starving sensation in the patient. Later, cells will find alternate energy sources such as fats and proteins, which in some cases lead to another symptom of type 2 diabetes, weight loss.

Polyuria and polydipsia are two symptoms of type 2 diabetes that are related to the changes in the osmolality of fluids in the body. Polyuria is defined as an increase in the times a patient need to urinate. This is the result of the filtration of excess glucose during physiological urine formation. In normal subjects, the amount of blood is below ­­­­­­­­­­­­the glucose transporter saturation levels and the kidney is able to reabsorb all of the sugar. However, diabetic patients filter an excessive amount of sugar in their urine, which the kidney is not able to reabsorb due to the saturation of glucose transporters. This results in abnormal excretion of glucose in the urine, a process known as glycosuria.  As a consequence, osmolarity, or concentration of solutes in a fluid, of urine increases and causes the filtration of additional water. The result is an increase in the amount of water excreted by the kidneys, therefore the frequency of urination. This leads to loss of body water content which will contribute to the other type 2 diabetes symptom, polydipsia.

Polydipsia refers to the excessive feeling of thirst in patients. This is the result of changes in the osmolarity of the patient’s circulating blood. First of all, the amount of fluid is lost through increased urination by the process associated with glycosuria previously described. Additionally, the increased levels of glucose cause an increase in the concentration of solutes further raising osmolarity levels. The rising levels in osmolarity are sensed in the brain, in the ­­­­­­­­­­­­­­­hypothalamus which will stimulate thirst areas of the brain.

Additional to the 3 classic symptoms of type 2 diabetes, other additionally signs and symptoms can manifest in patients. Among these are blurry vision, frequent infections, fibromas, and acanthosis nigricans.

Blurry vision is another symptom of type 2 diabetes resulting from changes in osmolarity. The increased sugar content in the blood leads to increased sugar filtration into fluids in the eye. As a consequence, more water will enter the eye and this excess in water volume will distort the eye lenses.

Frequent infections are thought to be the result of the harmful effects on key immunological cells. Among the frequently associated infection in diabetes are tuberculosis, gas-forming infections, necrotizing otitis externa, urinary tract infections, and foot ulcer infections.

This happens when your body is unable to use the energy from the food you eat and can make you feel tired and weak.

Acanthosis nigricans is a remarkable type 2 diabetes sign. This clinical sign is described as velvety, papillomatous, brownish-black, hyperkeratotic plaque usually found the neck and intertriginous surfaces. These signs have been found to be frequently associated with insulin insensitivity states, including diabetes, obesity and other disease associated with metabolic syndrome. It has been theorized to be the effect of insulin binding to insulin-like growth factor receptors in epidermal cells. It is remarkable that near sites of insulin injections, skin can turn darker similar to the process occurring in acanthosis nigricans. Additionally, because obesity is a risk factor for diabetes the association between increased levels of insulin-like growth factor-1 and obesity could point out to another contributing factor in acanthosis nigricans. But the major factor remains the association of insulin resistance with acanthosis nigricans and diabetes.

Among the chronic complications associated with damage to the microvasculature are retinopathy, nephropathy, peripheral neuropathy, and autonomic neuropathy.

Retinopathy, resulting from the damage to the blood vessels that irrigate it, can cause loss of vision one of the signs associated with type 2 diabetes chronic complications.  The eye is a structure that is sensitive to vascular dysfunction, therefore, diabetic patients need to be regularly evaluated by an ophthalmologist. Apart from retinopathy, diabetic patients have an increased risk of developing cataracts, glaucoma, and blindness.

Another chronic complication associated with microvasculature damage is nephropathy. Like retinopathy, nephropathy is also the result of vascular dysfunction. As diabetic nephropathy progress, patients might develop proteinuria which will cause further damage. Proteinuria might be clinically manifested as foamy urine but usually, is identified through urinalysis. As the initial nephropathy progresses into kidney failure, the patient might manifest edema secondary to the urinary filtration dysfunction.

Diabetic neuropathy, manifesting as peripheral neuropathy or autonomic neuropathy, will provide some frequently identified signs and symptoms of type 2 diabetes, along with some that are not as frequently identified. The chronic exposure to hyperglycemia causes damages to blood vessels as well. But, hyperglycemia, additionally, has a direct effect on peripheral nervous metabolism causing numerous clinical manifestation.

One of the manifestations of peripheral neuropathies includes loss of sensations in the “glove and socks” areas. This is described as symmetric polyneuropathy, in which the patients lose the sense of pain, numbness and temperature sensation but maintains vibration and position sense. As a result, the patients might refer to or the physician observes frequent injuries in these areas. In other cases, patients might refer to a fuzzy or tingling sensation in the “glove and socks” areas.

Autonomic neuropathies will cause a numerous number of signs and symptoms of type 2 diabetes which are not usually recalled. Among these are nausea, vomits, incontinence (fecal and urinary), dumping syndrome, increases in heart frequency, orthostatic hypotension, and numerous sexual dysfunctions (erectile dysfunction and decrease vaginal lubrication).

A chronic complication associated with damage to macrovasculature includes coronary heart disease, peripheral vascular disease, and cerebrovascular disease. These complications can be the most severe resulting from diabetes, therefore, their early detection is essential.

Coronary heart disease and peripheral vascular disease result from the formation of atherosclerotic plaques which can lead to occlusion of blood vessels. The effects of this process can result in problems ranging from angina pectoris to myocardial infarction. Therefore, patients with long-term diabetes experiencing chest pain should be evaluated for their risk of coronary heart disease. Given the dangers of an episode of myocardial infarction, diabetes can be a mortal illness.

Type 2 diabetes signs and symptoms are not easily identified in the early part of the disease onset. Therefore, the ideal strategy is to prevent patients from developing this disease. This can be the combined effect of acquiring good alimentary habits and practicing physical activity frequently.

Nevertheless, more patients continue to develop type 2 diabetes and as a result, a physician must be able to identify these patients to provide early diagnosis and a treatment plan. In order to identify patients in the early phases of the disease, the physician can rely on a screening test. Additionally, early signs and symptoms of type 2 diabetes can be identified, such as polyphagia, polydipsia, polyuria, blurry vision, and acanthosis nigricans. Regardless of this, patients sometimes still go undetected and develop a severe complication, which has specific manifestations which the physician must be aware of. Among these complications are neuropathies, nephropathy, retinopathy, coronary heart disease, cerebrovascular disease among others.  Because of these possible complications and the relatively symptomless initial presentation, type 2 diabetes might be considered a silent killer, which the physician must be ready to identify in almost any patient.