Diseases & Conditions
Liver Conditions
Hepatitis
✓ Evidence Based
In order to define Hepatitis C, we need to first explain the functioning of the liver. Being a liver disease makes it crucial for us to provide you with a basic understanding of this organ first.

Every person has a liver. This is one of the most important, largest organs in the human body. The liver is located behind the right part of the ribs for protection and it has numerous functions such as:

Summary: The liver is one of the largest organs in the body. It is located behind the right part of the ribs. It helps to filter the blood and remove by-products and waste, stores important nutrients such as fat, sugar, and vitamins, produces chemicals to clot blood and heal injuries, and makes bile for proper fat digestion.

What is Hepatitis C?

Now that we have established the liver function, it is time to define Hepatitis C. Hepatitis C is an inflammation of the liver (10). When the liver is swollen or inflamed, this may reduce its ability to perform its function (11).

With the advancement in medicine, people with chronic HCV or hepatitis C virus have a better outlook. With the introduction of the new anti-viral drugs, HCV is now curable for the majority of people diagnosed with this disease (16, 17). Such drugs are often prescribed in combination with other drugs (18, 19), but may also be prescribed to be used alone.

Hepatitis C attacks the liver by causing an infection (20). When this disease becomes chronic in patients the liver becomes sick and may result in cirrhosis, cancer, and complete failure (21, 22).

Summary: Hepatitis C attacks the liver and causes an infection, which then inflames the liver. This reduces the ability for the liver to perform optimally. Liver inflammation can be exacerbated by alcohol intake, medications, and other chronic diseases. Medical advances have helped cure or improve chronic hepatitis C virus. Chronic hepatitis C can cause cirrhosis, cancer, or complete liver failure if left untreated.

People are often scared that they would get hepatitis C because this virus is easily transmitted. You can get HCV through bodily fluids, including blood (23). This is why at a certain point in the past, blood transfusions were the main reason for spreading this disease (24). Today, people who are current drug users are at high risk of developing hepatitis C, since this disease is transferred through the needles they share (25). Also, the people who had received a blood transfusion for some reason before the year 1992 are at risk too (26).

The scary thing with this disease is that it does not show symptoms until the disease has progressed in the body of the patient (27). Only 15 to 20 percent of all people who have this virus fight it off without any treatment (28).

Summary: Hepatitis C virus is spread through bodily fluids, especially blood. Current drug users are at high risk of developing hepatitis C if they share needles. People who received blood transfusions before 1992 are also at risk. It is generally an asymptomatic disease until it has progressed throughout the body. 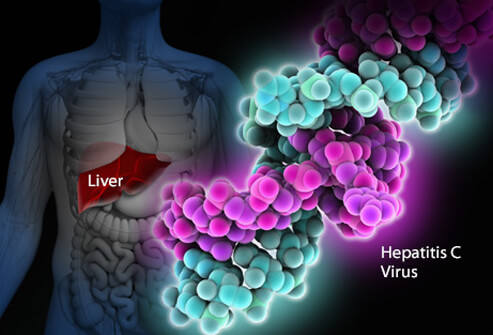 In the 8th century A.D the Hepatitis C virus was understood and described as something called ‘epidemic jaundice’. Pope Zacharias had quarantined people and animals that had this jaundice in order to prevent the disease from spreading to others.

During the Civil War, there were more than 40 thousand cases of jaundice reported by the Union Army. Armies were seriously harmed by this condition, which is the reason why HCV began to be referred to as ‘campaign jaundice’.

Summary: Hepatitis C was first understood, but not officially identified, until after an “epidemic jaundice” was discovered in the 8th century A.D. Pope Zacharias quarantined jaundiced people and animals to prevent the spread.

During World War II, there were 182.383 service members being hospitalized for this disease. For what is known the disease was recognized in the form of serum and the acute type and broke out among many of the members who had received a vaccine for yellow fever. When this happened, people started to look for the source in the serum being used to fight yellow fever and so they started calling this vaccine the serum hepatitis.

The acute type of hepatitis started developing in those soldiers that went through blood transfusions.

Summary: Many service members during World War II were hospitalized with hepatitis C. They discovered it in a vaccine for yellow fever, which many service members received. It also started developing in soldiers who had blood transfusions.

In the 1960s, Baruch Blumberg began researching genetic links. Such links were supposed to explain the connection to susceptibility to certain diseases. While doing this research, Blumberg accidentally found a blood sample of an Australian Aborigine that contained the hepatitis B virus. When this was discovered, a test for screening people for this virus was immediately developed, which then resulted in creating a vaccine that would fight the disease. The vaccine has proved to be effective and is used nowadays, too.

Blumberg received the Nobel Prize in 1976 for this amazing discovery.

After the discovery of hepatitis A, a vaccine was developed in 1981. The microbiologist that developed this effective vaccine was Hilleman.

The proteins found in hepatitis A and B were not testing positive for some cases of hepatitis. In 1975, some British and American researchers began researching and realized that there is a separate virus aside from the two known ones that are the cause of the death of people.

Hepatitis C was finally identified as a virus in 1989. The Centers for Disease Control and Prevention joined forces with Chiron to come up with this conclusion. However, no vaccine or drug has existed for treating hepatitis C until the year 1991.

Summary: Hepatitis C was officially identified as a virus in 1989 after proteins were discovered that were not hepatitis A or B. No vaccine was created after its discovery, and treatment drugs were not available until after 1991.

After many years of research and failed attempts, the Food and Drug Administration has finally approved the first hepatitis C drug. This drug is the interferon alfa-2B, also referred to as Intron A. This is the first known interferon drug being used for the treatment of hepatitis C in patients.

To clarify, the interferons are found in the human body. We are speaking of proteins that got the name because of the replication of the hepatitis C virus.

When some cases of hepatitis were not testing positive for hepatitis A or B, scientists

Before the first drug was introduced, the United States began screening the blood supply for HCV in 1990. It was 1992 when a better test was introduced.

Summary: The first hepatitis C drug has finally been approved. This interferon alfa-2B, or Intron A drug, is the first drug used for treating hepatitis C. Before the first drug, the U.S. started screening donated blood to prevent spread in transfusions. It wasn’t until after 1992 that this process improved.

Six years later, the FDA approved ribavirin to be used in combination with interferon with the purpose of treating hepatitis C. When used on its own, ribavirin showed no effect in treating this disease, but if the two were combined together or in combination with other drugs too, a better therapy was introduced. Right now, this drug is the most effective known cure for preventing HCV relapse.

Nine years after the approval of the pegylated interferon, the FDA approved a test that was called Oraquick. This test is a rapid antibody test, which gives results in only 20 minutes.

Summary: Interferon and ribavirin combination treatment is the most effective known cure for HCV and the first approved in the late 1990s. Interferon and polyethylene glycol was introduced in 2001 to prevent relapse as well. Nine years later, the test pegylated interferon, Oraquick, was approved. This is a rapid antibody test that provides results in 20 minutes.

The year 2013 was a very positive year for hepatitis C patients. In 2013, the FDA has approved three medications for treating HCV.

The first approved medication was Sofosbuvir or Sovaldi, used in therapies of HCV. This drug is not used in combination with the approved pegylated interferon and costs a lot. This is why many people throughout the world cannot afford to use this drug as their HCV treatment. If an individual is qualified, the SupportPath compassion program may be able to subsidize the drug.

Another approved medication was the combination of Sovaldi and ribavirin, which also works without the addition of pegylated interferon. The third approved drug is Olysio or Simeprevir, also used without the interferon.

All these drugs show different ranges of effectiveness in different patients. The effectiveness also depends on the HCV genotype and the drugs used for treatment. They are all available in pill form and offer a shorter treatment length than other drugs. Additionally, all three are now proven to result in fewer side effects when compared to other drugs.

Summary: In 2013, the FDA approved three medications to treat hepatitis C. Sofosbuvin (Sovaldi), Sovaldi and ribavirin, and Olysio (Simeprevir). All three drugs show a range of effectiveness in patients because hepatitis C has many different genotypes. Therefore, treatment is based on the specific patient’s HCV diagnosis.

Hepatitis can cause acute and chronic infection and become a lifelong illness for some people. The virus can be a mild illness and last for as little as a few weeks, but if not treated or healed on its own, it can turn out to be a lifetime struggle of the patient.

We are speaking of a virus that is most commonly spread through medical equipment inadequate sterilization, unsafe injection practices like taking drugs and transfusions of unscreened blood.

On a global level, there are 150 million people diagnosed with hepatitis C infection. A big number of these people develop liver cancer or cirrhosis after a while of suffering from this disease. Out of these people, 700,000 people die yearly from liver diseases related to the hepatitis C virus. This is still a huge number, considering the fact that antiviral medicines are known to cure 90% of those people who are diagnosed with this disease.

At this moment, there is no vaccine or definite cure for the hepatitis C virus. People who suffer from chronic hepatitis C infection have a risk of cirrhosis that reaches 30% within the first 20 years of the diagnosis.

Hepatitis C is a virus that can be found everywhere in the world. According to research, people with hepatitis C are found in the biggest numbers in Central Asia, East Asia, and Africa. This leads to the conclusion that the infection can concentrate within the general population, aside from the known fact that it is concentrated among people who inject drugs.

Summary: If left untreated, HCV can cause acute or chronic infection, and become a lifelong illness. It most commonly spreads through unsterilized needles or medical equipment. Injectable drug users are at high risk because it is transferred from infected blood or bodily fluids. 150 million are diagnosed with HCV worldwide, and about 700,000 people die yearly from complications.

You cannot get hepatitis C through sharing food, water or even breast milk. Unlike what many people still think, a person cannot infect you with hepatitis C by hugging, kissing or sharing drinks and food.