Cancer is ubiquitous in the human population; the only certain way to avoid cancer is to not be born, as to live is to incur risk. It is the second leading cause of mortality in the United States, cardiovascular disease taking the higher toll. Even more fussing than the mortality rate is the emotional and physical suffering caused by it. Patients and people often ask, “When will there be a cure for this deadly disease?”. The solution to this popular question is not easy, because cancer is not one disease but many disorders with widely different historic nature and response to treatments. The only hope for controlling cancers is in our interest and knowledge in understanding and making researches in this field. Along with this, major insights into the causes of cancer can be obtained by epidemiologic studies that relate particular environmental, racial and cultural influences to the occurrence of specific neoplasms. Certain diseases associated with an increased risk of developing cancer also provide clues in dealing with this disease. 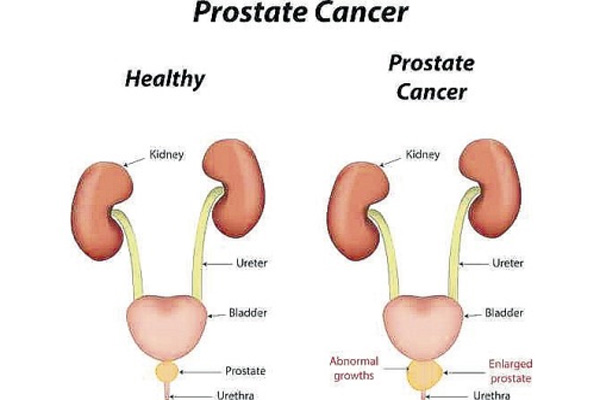 The most common known tumors in men arise in the prostate (27%), the lungs (14%) and the colon/rectum (8%). Prostate cancer being the topper in affecting men, it is really important and necessary to have the right knowledge about it.

The prostate is a gland about the size of a chestnut and weighs about 30 grams. The word ‘prostate’ is derived from the Greek expression meaning “one who stands before”, which describes the position of the prostate gland. It is a part of the male reproductive system. It is a retroperitoneal organ encircling the neck of the bladder and urethra and is devoid of a distinct capsule. It is located directly below the bladder and above the muscle of the pelvic floor. The rectum is behind the prostate making it possible to feel the gland from the rectum using the finger.

Functions of the Prostate

The prostate gland secretes a thin, milky fluid that contains calcium, citrate ion, phosphate ion, a clotting enzyme, and a profibrinolysin. During emission, the capsule of the prostate gland contracts simultaneously with the contractions of the vas deferens so that the thin, milky fluid of the prostate gland adds further to the bulk of the semen. A slightly alkaline characteristic of the prostatic fluid may be quite important for successful fertilization of the ovum because the fluid of the vas deferens is relatively acidic owing to the presence of citric acid and metabolic end products of the sperm and, consequently, helps to inhibit sperm fertility. Also, the vaginal secretions of the female are acidic (pH of 3.5 to 4.0). sperms do not become optimally motile until the pH of the surrounding fluids rises to about 6.0 to 6.5. Consequently, it is probable that the slightly alkaline prostatic fluid helps to neutralize the acidity of the other seminal fluids during ejaculation and thus enhances the motility and fertility of the sperms.

The prostate is made up of 30 to 50 compound tubule-alveolar glands that are embedded in a framework of fibromuscular tissue. In sections, the glandular tissue is seen as a form of numerous follicles that are lined by columnar epithelium. The epithelium is thrown into numerous folds (along with some underlying connective tissue). The follicles drain into 12 to 20 excretory ducts that open into the prostatic urethra. The ducts are lined by a double-layered epithelium. The superficial (luminal) layer is columnar, and the deeper layer is cuboidal. Small rounded masses of uniform or lamellated structure are found within the lumen of the follicles. They are called amyloid bodies or corpora amylacea. These are more abundant in older individuals. These consist of condensed glycoproteins. They are often calcified. The fibromuscular tissue forms a conspicuous feature of sections of the prostate. It contains collagen fibers and smooth muscle. Within the gland, the fibromuscular tissue forms septa that separate the glandular elements. These septa are continuous with a fibrous capsule that surrounds the prostate. The capsule contains numerous veins and parasympathetic ganglion cells. The prostate produces a secretion that forms a considerable part of semen. The secretion is rich in an enzyme (acid phosphatase, amylase, and protease) and in citric acid. The prostate also produces a substance called prostaglandins that have numerous actions. The glandular part of the prostate is poorly developed at birth. It undergoes considerable proliferation at puberty and degenerates in old age. The prostate is traversed by the prostatic urethra. In the adult, prostatic parenchyma can be divided into four biologically and anatomically distinct zones or regions namely peripheral, central, transitional, and periurethral zones. It is very important to understand this histology because the types of proliferative lesions are quite different in each region.

What is Prostate Cancer? 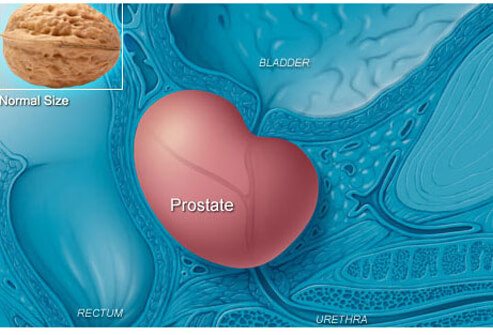 In Prostate cancer, androgens play the main role. The growth and the extent of survival of prostate cancer cells depend on the androgens that bind to the androgenic receptors (AR) and this induces the expression of pro-growth and pro-survival genes. Genetically it is found that the X-linked AR gene contains a polymorphic sequence of repeating CAG codon. ARs with shortest stretches of this CAG codon has the highest sensitivity to androgens. More directly, to be clearly understood, the length of the repeats is inversely related to the rate at which prostate cancer develops. The significance of androgens in maintaining the growth and progression of prostate cancer cells can be clearly seen in the therapeutic effect of castration or treatment with anti-androgens. Mostly tumors of prostate escape from treatments through a variety of mechanisms like:

The most common epigenetic alteration that has been found to be happening in prostate cancer is hypermethylation of glutathione S-transferase (GSTP1), because of which this specific gene is down-regulated. This GSTP1 gene is an important part of the pathway that prevents damage to cells from a wide range of carcinogens. So when this epigenetic change happens we lose the protection from not acquiring this tumor. Along with this, we have the silencing of a number of tumor suppressor genes that are involved in a cell cycle regulation. This silencing is a part of epigenetic modification.

As can be surmised from the multiplicity of the abnormalities, prostate carcinoma is the product of some critical combination of acquired genomic structural changes, somatic mutations, and epigenetic mutations.

A putative precursor lesion, prostatic intraepithelial neoplasm (PIN) has been evidently related to invasive cancer. First, both PIN and cancer typically predominate in the peripheral zone and are relatively less common in other zones. Studies have revealed that many of the molecular changes seen in invasive cancer coincide with that of the PIN, strongly contemplating the evidence that this could be a precursor of invasive cancer of the prostates. But still the natural sequence as on how this PIN progresses to expressed carcinoma just still under study.

Grading of any cancer is really important, as it implies as on how this course of tumor progresses and this holds a big role in the treatment of it. The Gleason system is the most widely used grading system. It is divided into five grades. Grade 1 be the most differentiated tumor, whereas Grade 5 be the least differentiated the other grades fall in between these extremes. Usually, most tumors have more than one pattern of differentiation, so along with this primary grade (dominant pattern), a secondary grade is also introduced. Based on the addition of these two grades, we have the Gleason score. The Gleason score of 8 through 10 tends to be advanced cancers that are less likely to be cured. Whereas a Gleason score of 2 to 7 represents well-differentiated tumors that have an excellent prognosis. So the rule of thumb is the higher the grade score, the lesser is the tumor differentiated, making the most possible metastasis thereby leading to less chance of curing it.

Staging of prostate cancer is also important in the selection of an appropriate form of therapy. We have the TNM system of staging to designate the extent of primary tumors(T), status of regional lymph nodes(N), and distance metastasis(M) all given the numbers 1 to 4 as well as alphabets A to D all expressing the stage of cancer.

Localized prostate cancer is usually discovered while detecting a suspicious nodule on rectal examination or elevated serum PSA levels and they are usually asymptomatic. Patients with clinically advanced prostatic cancer may present with urinary symptoms and they don’t come to notice this because of back pain caused by vertebral metastasis. These osteoblastic metastases cases pursue a universally fatal course. Measurement of serum PSA levels is widely used to assist with the diagnosis and management of prostate cancer. PSA is a product of prostatic epithelium and is normally secreted in the semen. It is an androgen-regulated serine protease whose function is to cleave and liquefy the seminal coagulum formed after ejaculation. In normal men, only minute amounts of PSA circulating in the serum. Elevated blood levels of PSA occur in association with localized as well as advanced cancer. However, as a screening test for prostate cancer, the use of PSA remains controversial in that it lacks both sensitivity and specificity. Several newer tests seem to be more accurate than the PSA test, including:

These tests aren’t likely to replace the PSA test any time soon, but they might be helpful in certain situations. For example, some of these tests might be useful in men with a slightly elevated PSA, to help determine whether they should have a prostate biopsy. Some of these tests might be more helpful in determining if men who have already had a prostate biopsy that didn’t find cancer should have another biopsy. Doctors and researchers are trying to determine the best way to use each of these tests.
Treatments include surgery, radiation therapy, high intensity focused ultrasound(HIFU), nutritional and lifestyle changes(vitamin D and soy supplements), hormone therapy, chemotherapy, and immunotherapy. Targeted drug therapy, as well as radiofrequency ablation (RFA), helps in battling with this deadly disease and its killer osteoblastic metastasis.